Spicy Spanish Chicken
Chop two chicken breasts into cubes
Fry in a little coconut oil until white
Add chopped red onion, a chopped chilli and garlic to the chicken and cook until the onions have softened
Add some chopped tomatoes and a few tablespoons of passata
Add a sieved tin of chickpeas and leave to simmer
Serve with some green salad sprinkled with mixed seeds

Homemade Bun-less Burgers
Use the leanest mince you can- sirloin mince is best
Add one finely chopped onion to the mince in a big bowl, add a tbslp of Worchester Sauce and a little rock salt and black pepper to taste
Mould into four patties and fry each side until cooked to your liking
Serve with crispy lettuce, fresh tomatoes and some homemade guacamole 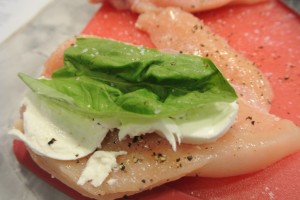 Asian Mince
Lightly fry some turkey breast mince
Add chopped garlic- about two cloves and a few shallots
Add a handful of chopped mushrooms and some unsalted peanuts
Add a tablespoon of oyster sauce and soy sauce
Once cooked, add a poached egg on top with a few chopped scallions, some more drops of soy sauce and some sesame seeds

Basil Chicken
Preheat your oven to 180
Rub two breasts of chicken with butter, salt and pepper
Wrap in bacon tightly with some basil and mozzarella tucked under each piece of bacon
Wrap in a little tin foil and place in the oven
For last 10 minutes of cooking remove the tin foil for a little crisp to the bacon
Also oven cook a few tomatoes on the vine with some olive oil and salt
Serve together with a little extra olive oil blitzed with basil as a dressing